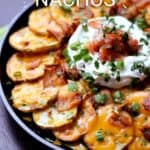 This Irish Potato Nachos recipe is a fun twist on traditional nachos, made with thinly sliced potatoes, crispy bacon, melted cheese and all of your other favorite toppings! They are perfect for watching the big game or a delectable appetizer at your next party.

I was watching Food Network a couple of years ago, and the entire show was devoted to Irish Pub Foods. Boy did that catch my attention! On one of their many stops across the country they visited a pub that served Irish Nachos, and I have been wanting to make them ever since!

I cannot remember which show that I was watching, but I do remember that they were made with deep fried potatoes. Since I was trying to avoid frying them, I decide on two different methods to try out. I was originally going to make two separate posts, but changed my mind once I tasted these babies.

Maybe I should explain after we make them!

What are Irish Nachos

Thinly sliced Russet potatoes that are seasoned and baked to crispy perfection. They are then arranged on a a skillet pan or baking sheet and topped with cheddar cheese and large bacon pieces, and baked until the cheese is melted. You then top them with your favorite toppings like Pico de Gallo, Salsa, Guacamole, green onions, sour cream and cilantro.

How to make Irish Potato Nachos

I found some insanely huge potatoes at the store, so I only needed 1 and a 1/2 potatoes.

Wash them, dry them, and slice them into 1/4 inch rounds.

Place them in a large bowl, and mix with olive oil, rosemary, thyme, sea salt, and black pepper.

Place on a parchment lined or greased baking sheet, and bake at 450 degrees for 20 minutes.

Flip them over, and cook for an additional 20 minutes.

They should be golden brown, and slightly crispy. I used a low-sided skillet, I have no idea what the actual name of the pan is, but it looks like it would be perfect for tortillas. 🙂  Place the potatoes on the skillet, slightly overlapping the edges as you go.

and the chopped bacon.

return to the oven for 3 to 4 minutes to melt the cheese. Sprinkle green onions and cilantro over the cheese. Serve with Greek yogurt/sour cream and diced tomatoes/Pico de Gallo/Salsa.

I put the Greek yogurt and pico de gallo in the center of the nachos, but you could also serve it on the side. I'm sure they would also be delicious with guacamole, but the grocery store was sold out of guacamole and avocados!!

Now, for option number two. These are what I like to call the "cheater version". I baked up some big, thick, steak fries in a 450 degree oven for 30 minutes (15 minutes on each side). I then covered them with cheese and bacon just like the homemade version.

These are probably closer to what you would get in an actual pub.

Okay, you would not find those in "My" Irish Pub! My issue with this version, is that they tasted like "French fries" with cheese and bacon on top. The homemade version, has a fresher, lighter taste...surprise, surprise! There is a hint of rosemary and thyme that is unexpected, and makes them more special.

Tools used to create these nachos

Ultimately, I did not need two posts, the homemade version is perfect! 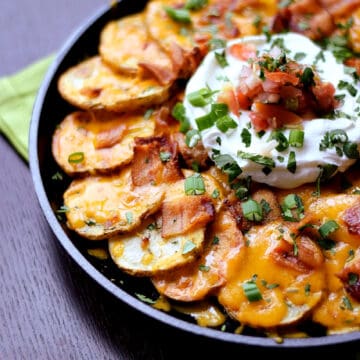 Hi, I'm Lisa - Welcome to my kitchen! I have a passion for good food and love sharing my creations with friends, family and everyone that loves a homecooked meal. This is where I share my favorite recipes with step-by-step instructions as well as tips and tricks to help you make these delicious recipes in your home.